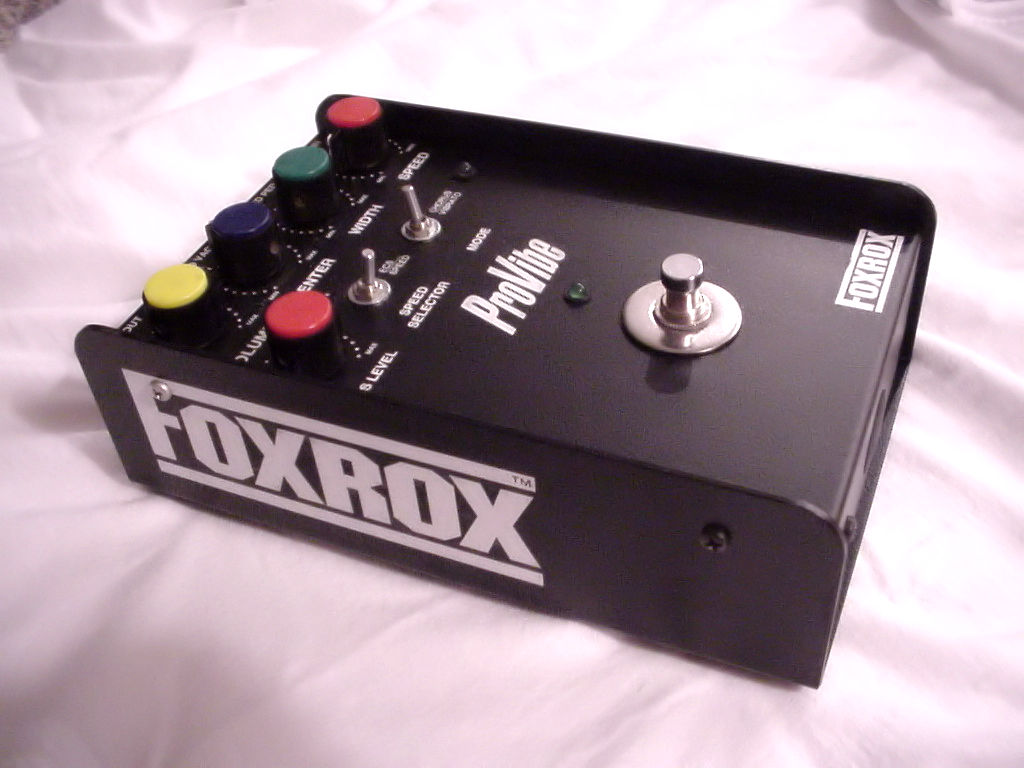 ProVibe accurately produces the sounds of the classic Uni-Vibe effect, with speed controllable by foot pedal. Available in rack mount or floor model.
A Little History from Dave's Archives
Spring, 1987 - A guy who bought a Fuzz Face asked if I could fix his broken Uni-Vibe. For the first time, I had a Uni-Vibe in my hands. I fixed it, and while I had it, I traced the circuit and built one for myself. Word got out that I could build Uni-Vibes, and over the next couple years I built and sold few custom units.
Summer, 1992 - I got a call from Tom Lanik of North Star Audio. He was a US distributor for Roger Mayer, who was making guitar pedals in the UK. He heard that I made some Uni-Vibes and asked if I was interested in offering them as a real product. It seemed exciting, so registered the Foxrox Electronics name and called my pedal the "ProVibe". Tom came up with the name. I made around 40 large-box ProVibes, in addition to some rack mount units. The Provibe is the first Uni-Vibe-clone pedal to include a "Center" control, which does what the Uni-Vibe's internal trimmer does. It sets the center point of the sweep. I consider it an essential control because that setting varies in most Uni-Vibes and Uni-Vibe-style pedals. ProVibe was one of the very first, if not THE first commercially available Uni-Vibe clone.
Spring, 1993 - I introduced a new, smaller version of the ProVibe. This unit was the first Uni-Vibe-style pedal to incorporate envelope-controlled speed. Play hard and it speeds up, play softly and it slows down.
ProVibe Advertising: 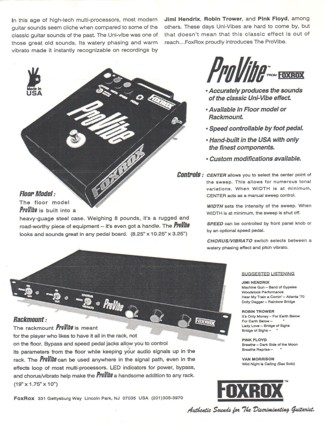 FEATURES
Controls:
Floor Model:
The floor model ProVibe is built into a heavy-gauge steel case. Weighing 8 lbs, it's a rugged and road-worthy piece of equipment - it's even got a handle.
Rackmount:
The rackmount ProVibe is meant for the player who likes to have it all in a rack, not on the floor. Bypass and speed pedal jacks allow you to control its parameters from the floor, while keeping your audio signals up in the rack. The ProVibe can be used anywhere in the signal path, even in the effects loop of most multi-processors. LED indicators for power, bypass, and chorus/vibrato help make the ProvVibe a handsome addition to any rack.
Download a vintage copy of the owner's manual here.