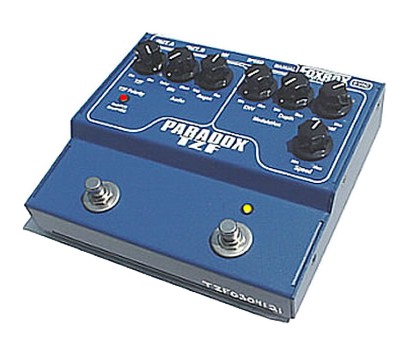 Click HERE to browse the original Paradox TZF web pages and listen to sound clips through the Way Back Machine.
Custom Through-Zero Flanger Story from the Foxrox Archives:
Spring, 1993 - While doing a Crest Audio service call for the Lenny Kravitz tour, I was able to spend a day with Lenny, letting him check out the various pedals I built. He ended up buying a ProVibe, a custom Fuzz Face clone, and an Octavia clone. His guitarist, Craig Ross, bought a Tone bender clone that I built. I attended several rehearsals for the "Are You Gonna Go My Way" tour, and I sold his sound engineer, Tom Edmunds, a delay unit that I specially modified to get that massive through-zero-flange sound in the middle of that song. I set him up with a control box that he covered in leopard skin and called "The cool box."

An original design...not a clone. Paradox TZF is the first and only flanger of its kind. Through-zero-flanging was done in the '60s using a pair of analog tape decks. TZF recreates that over-the-top flanging sound in a stomp box.

Features
Bypass foot switch: True bypass with LED for both outputs A and B. Signal switching done with audio relays.
TZF Polarity foot switch: Switches polarity of TZF signal. Dual color LED is red when positive, and green when negative.Two very different, but essential TZF sounds, with the ability to be switched during performance.
Positive TZF creates a very musical sweep when it crosses over the zero point. Think - Brian May (Queen), Keep Yourself Alive. It's a very full sound with a fat low end.
Negative TZF is more intense and creates a deep cancellations as it crosses over the zero point. With the right settings you can get it to become very thin and cancel out completely. Think - Hendrix, House burning down. This mode has a hollow sound, subtracting low end as it approaches the zero point.
Modulation control
Envelope takes the dynamics of your playing and turns it into a DC voltage which is added to whatever you dialed in with the Manual control. This produces some of the most incredible flanging sounds. All Modulation controls are highly interactive and can yield flange sweeps never before created. With a distorted guitar, Env can be set to produce unpredictable, erratic flanging sounds, very similar to an airplane flying over you on a windy day.
Depth controls how wide the sweep is.Turn it down and the sweep goes away. This allows flange control with Manual knob, Manual expression pedal, or Envelope control. Maximum setting causes serious pitch bend. For wide sweeps, set at Depth at Max and Speed at Min. Typical usable settings are between 9:00 and 3:00
Manual (with jack for pedal control). Controls a DC voltage that sets the base delay time. Used for dialing in a custom sweep, and flanging manually. Also used in conjunction with the Depth pot, setting the base delay time, affecting upper and lower limits of the sweep. When using an expression pedal, the Manual knob can be used to set where the TZF point occurs within the pedal's travel.
Speed (with jack for pedal control). When set below 11:00, it enters a much slower speed range. Min - 11:00 SLOW speed range. 11:00 - Max FAST speed range. When using a speed pedal, the Speed knob sets the fastest speed limit.
Audio control
TZF signal mix. Adds the TZF signal to the mix. When TZF and Modulated signal are mixed, the TZF effect occurs.
MIX - Clean/Modulated delay. CCW- Modulated signal only. Can be used for vibrato effects.CW- Clean only. Center - Even mix of modulation and dry. Dial in the mix you want.
TZF polarity (LED and foot switch), Red = Positive summing, Green = Negative summing. Foot switch selects between them.
Regeneration positive/negative mix. Adds resonance to the mix by providing positive or negative feedback. Negative feedback is more prominent through output A, and positive feedback is more prominent through output B. This regeneration feature is calibrated NOT to self-oscillate. Distortion can occur at maximum settings when excessive signal is applied.
Other: Stereo outputs (all true bypass using audio relays), 9 Volt AC operation, all-analog bucket brigade delay (BBD) based flanging, compander based noise reduction, Emphasis / de-emphasis noise reduction, easy glide action when controlling flange manually - keeps the sweep "graceful" by ramping down.
Power - Paradox requires 9 Volts, AC (9VAC) in order to operate. A power adaptor is included with each unit. Don't confuse 9VAC with 9VDC, which is what you get from a 9V battery. That's what most other effects use, but not TZF. TZF's internal circuitry runs at 36Volts DC, split into plus and minus 18 Volts. Other effects that run on 9VAC include Captain Coconut 2, Digitech Whammy, Line 6 POD, and others. The power units for these effects are all interchangeable.