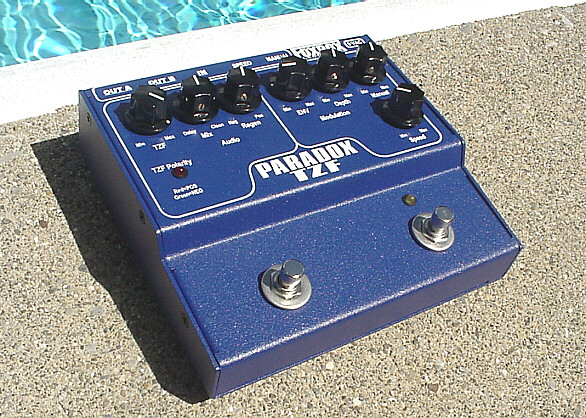 When I went to the Institute of Audio Research (IAR) in the 1983, I was curious about through-zero-flanging, so I asked one of the professors if it was possible in real time. He told me no - it's impossible. You would need a time machine so you could get sound from the future in order to get that over-the-top sweep. I understood his point, but the first thing that occurred to me was - what if I delay the dry signal? It's almost-real time.

A couple of years later, I got a rack mount dual delay unit and rigged it up to do just that and it sounded amazing. In April 1993, I was attending the Lenny Kravitz rehearsals for the "Are You Gonna Go My Way" tour. That song had a through-zero sweep, and the engineer was trying to get it with an SPX90, but it wasn't happening. I told him I could rig up a unit to get that over-the-top flange and he asked how long it would take me. The next day I showed up at the Lyric Theater in NYC with my modified dual delay and a control box for sweeping the flange manually. They loved it, bought it from me, and used it on the tour. I told Lenny I was going to make a through-zero-flanger in a stomp box and he said to put him down for one. I tried to design it and build a prototype, but it was over my head at the time. A year or two later, I ran into Lenny briefly before one of his shows and he remembered - he goes "you got my flanger?" Still working on it!...

In 2002, I gave it another shot and this time I got it working the way I wanted. Foxrox Paradox TZF - the first guitar stomp box designed to create a through-zero-flange in almost-real time. Paradox TZF was in production between 2002 and 2006, and there's just under 500 of them out there.
Previous Post
Next Post