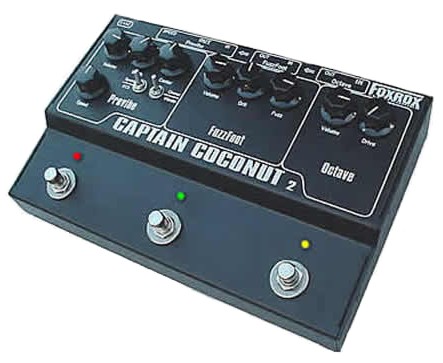 Features
FuzzCard "plug-in fuzz" concept - Fuzz is a touchy thing. Most players have their own idea of what the ideal Fuzz should sound like. This is due in part to the fact that the original FuzzFace was not a consistent product, there were different versions (Silicon NPN, germanium PNP, custom mods, etc..) and individual units sounded different from one another. Also, different types of Fuzz's sound different depending on what amp is used. The FuzzFoot, my custom version of the classic Fuzzface circuit covers more ground than most Fuzz pedals, but still I saw the need to add one more degree of flexibility - I designed the FuzzCard, the entire Fuzz circuit on a plug-in circuit board. This makes it possible to put any version of the classic Fuzz circuit into a Captain Coconut 2 without having to make any changes to the main circuit board. The tone of a Fuzz is very subjective, and the FuzzCard makes it possible to please even the pickiest players. Several different versions of the Fuzz circuit will be available, in addition to a stand - alone FuzzFoot unit that will be built around the modular FuzzCard. FuzzCard is also an experimenter's dream. For those who prefer to build their own Fuzz, a blank FuzzCard will be available so you can pick your own transistors and other components and modifications without any mods to the main Captain Coconut circuit board.
Envelope Controlled Speed (ECS) for the Provibe - ECS takes Vibe speed control to a whole new level. In addition to front panel and pedal control of speed, the Provibe offers an option to control the speed with the dynamics of your playing. This was a feature that made the '93 / '94 version of the Provibe unique among all the other Univibe clones that popped up in the mid '90s, and I decided to bring this awesome feature back. When you put the ECS/SPEED switch in the ESC position, the SPEED knob becomes the sensitivity and decay control for the ECS circuit. You select the sensitivity level that works the best for your guitar, playing style and amount of speed variation you want. From there, you create speed variations with your playing which are unique and incredibly expressive. The harder you hit the strings, the faster it spins. As your notes die down, it slows. Picking style, guitar volume knob changes and other effects in the signal chain all contribute to unique, yet reproducible speed variation that no other Vibe effect is capable of. This feature, along with the flexibility and super lush 3-D sound of the Provibe makes it superior to all other "Vibes".
Improved Speed pedal control - The original Univibe came with a speed control pedal, there was no speed control on the front of the unit. Since then, virtually all of the true Vibe clones which offer external speed pedal control have relied on the same basic circuit. This is good and bad - it's good because nothing beats the original Univibe "throb" that this circuit delivers. The bad part is that it requires a custom-wired dual potentiometer with an unusual taper. The common result is poor speed control range, not to mention the fact that it's a real pain in the butt to modify a rocker pedal to serve this function, and it can be expensive to pay someone else to do it. Captain Coconut 2 uses opto couplers to accomplish speed control, while still using the original vintage circuitry. Just about any off-the-shelf volume pedals or expression pedal can be used to control the speed of the Provibe, without any internal modifications. If you have a passive volume or expression pedal that you don't use, chances are it will make the ideal Provibe speed pedal. When a speed pedal is hooked up to the Provibe, the front-panel speed control becomes a "maximum speed limiter". This provides a degree of pedal control that no other Vibe offers.
Order of effects - Just like the original Captain Coconut, CC2 offers the ability to patch the three effects in any order you want. For convenience, the effects have a default signal flow. The order of effects in CC2 is Octave>FuzzFoot>Provibe. The original Captain Coconut was Octave>Vibe>FuzzFoot. While they are both valid combinations, the new order seems to be what more people prefer and it's my favorite setup, so I made the change.
Incredible new super rugged steel chassis - The original Captain Coconut was built into an off-the-shelf Hammond-style dye cast aluminum enclosure. This presented certain challenges such as limited availability, the fact that all the holes had to be hand-drilled and look is kind of "boxy". In order to make CC2 easier to produce, I decided to design an all steel, custom punched, angled enclosure. It's a two piece box made from cold-rolled steel - the top part is 16 gauge and the base is 14 gauge and it's powder coated in black. This adds up to a heavy duty, bullet-proof enclosure which is virtually indestructible, with a look and feel that just oozes with quality.