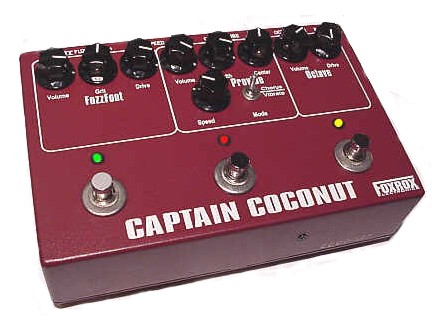 Octave, Vibe and Fuzz effects in one unit. Captain Coconut brought together three of the most sought-after effects in one easy to use, reliable and great sounding box. All faithful reproductions of vintage effect circuitry, fine-tuned for the best sounds and added flexibility.
A Little History from Dave's Archives
November, 1999 - I was dreaming about quitting my day job and making pedals full time. I contacted Mike Piera, aka Analog Mike, and asked him what he thought of this idea: A single unit that contains a UniVibe, a Fuzz Face and an Octavia. It was something I was tossing around for years - and he liked the idea. I started designing Captain Coconut.

Summer, 2000 - I started making Captain Coconut pedals. The first and only guitar pedal to incorporate Jimi's 3 main effects. The unit consisted of a UniVibe, with Center control, a clone of the Tychobrahe Octavia, and a Fuzz Face with a twist. Knowing that some people prefer Germanium Fuzz Faces, while others prefer Sililcon Fuzz Faces, I wanted this fuzz to have the best of both worlds. The result was the "PNP Silicon/Germanium Hybrid Fuzz," the first Fuzz Face-style fuzz to to use one Silicon transistor and Germanium transistor. Captain Coconut's fuzz section was called "FuzzFoot" and it was the first Fuzz Face clone to include a bias knob for the transistors. The control is called "Grit" and it is used to replicate different fuzz face sounds, from smooth to choppy and everything in between.
Features
Octave effect - Classic octave doubler fuzz. Get that "Purple Haze," "One Rainy Wish" upper octave effect. Earthy, flutey tone. Just like the Tycobrahe Octavia.
Provibe effect - Original vibe effect. Lush 3-D phasing chorus effect for that "Machine Gun", "Bridge of Sighs" swishy vibe sound. Center control allows you to dial in all the greatest vibe tones. Switch selects between CHORUS and VIBRATO modes. Just like the Univibe.
FuzzFoot effect - Classic British Germanium PNP circuit with some much needed improvements. Sounds great with wah wah pedal. Get all the greatest fuzz sounds with GRIT knob for variable sputter. Cleans up great with guitar volume knob. Ultimate version of classic FuzzFace effect.
Need an owner's manual for an original Captain Coconut? Click here to download a PDF.